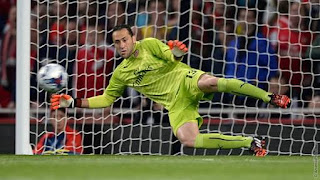 Arsenal Goal keeper,David  Ospina has been a top target for turkish top flight club Besiktas f.c ahead of new season campaign for the Turkish giant.

Besiktas football club of turkey made a bid
of 2 million pounds for the colombian man.

Join here to be financially free

Arsenal is said to be interested in the deal that could take the Arsenal shot stopper away from emirate stadium to turkish club ahead of new season.
premier soccer league news