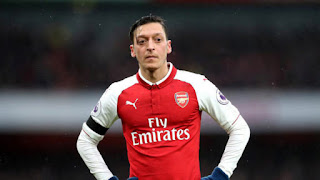 Mesut ozil has dropped a breaking news of his retirement from international football.
This sudden news of retirement has been going around for sometimes because of a rumor that he was seen in a picture with Turkish president Rece Tayyip Erdoğan that some believe it goes against commitment shown to the Germans during the world cup in Russia.
Arsenal fans of mesut ozil pledge thier support for his decision in order to concentrate in his career even though he is a Turkish born German international.
premier soccer league news