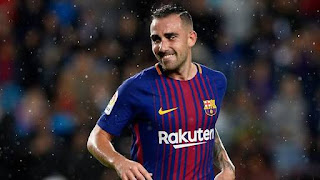 Barcelona and Spanish star striker has completed a loan move to borussia dortmund on Wednesday in an undisclosed fee.

Paco Alcacer joined Barcelona from Valencia in the year 2016 with a sum of €30 million euro to complete the transfer.

The 25 years spanish star player has completed a year season long loan move to borussia dortmund with an option to sign the star player on permanent contract.

Paco Alcacer is going to cost €25 million euro for borussia dortmund after the end of current season if they are interested in signing the star player on permanent basis.
premier soccer league news