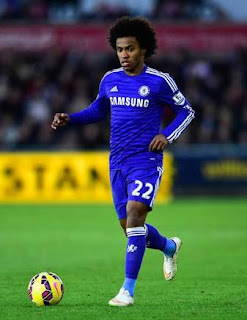 The Brazilian star player admit to tough training sessions and his teachings to all players to take every game a do or die while on the pitch for his tactical reason in every  match day game.

Willian disclosed the incomparable difference between the tactics of former boss Antonio Conte to New boss maurizio sarri,as he prefers the 4-3-3 formation by the new manager to old 3-5-2 formation adopted by Conte.

The star player said he could have leave chelsea football club in the summer transfer if conte remain the club boss but said he is happy to work and claim a regular football under new manager.