David Degea Reveals why he put conrtact extension on Hold. 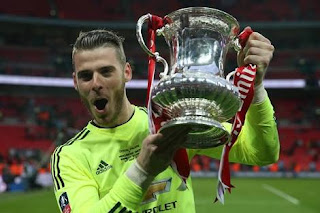 Manchester united and Spain first choice goalkeeper David Degea has disclosed the reason why he is yet to extend his contact with old trafford club.

The star shot stopper has disclosed his willingness to extend his contract with the club if the management can offer him an improved wages that can doubled his current wage for contract extension.

The talented goal keeper said he needed a contract review because of his good form and consistency in the last three years Premier league season as united best player with the achievement during this period.

David Degea is currently earning £180,000 thousand pounds a week,but stated that he would be considering offer less that is less than Sanchez and equals of Paul pogba £300,000 a week pay.
premier soccer league news