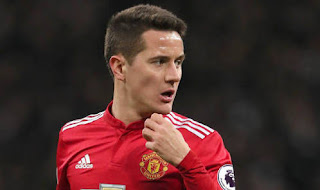 Manchester united have shown willingness in extending the contract for their star player in order to block a move away from the club.

Spanish and Manchester United Star player has been a target for Barcelona and his former club Athletico Bilbao but the player is said to be interested and ready for contract extension at Old Trafford club.

Manchester united has offered a 2 years contract extension for the player and Hererra is considering the new deal with his agent in order to let the player make the right decision with his career in future.