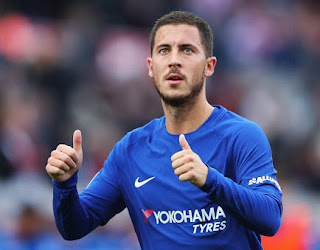 The Belgian and Chelsea football club skipper Eden Hazard has disclosed reason why he is happy with the Stamford bridge club in the current football season.


The Superstar and  versatile forward has explained the current free role position offered since the arrival of the new Italian born Chelsea manager to the London club.

The star player has Said his current good run of form has been possible due to the peaceful atmosphere in the dressing room and the new adopted style of team work play starting from defence line,which he said is different from the traditional old style pattern of the stamford bridge club.

Eden Hazard has never Rule out the possibility of leaving Chelsea when he explained further that it was a childhood days dream for him to play in Spanish laliga before the End of his active football career opportunity to play in top flight club.
premier soccer league news