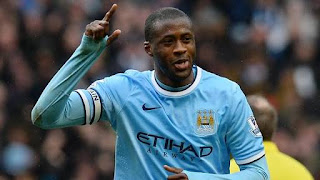 The former Manchester City utility star midfielder Yaya toure,is without a club since he has run out of contract with the
Etihad stadium club during last summer.

The Ivorian born star career came to an end at etihad last season after joining the club from Barcelona in july 2010 with £24 million pounds move from Spanish giant.

He was unveiled by olympiacos after a 5-0 home win against PAS GIANNINA FC in a super league game on sunday.

The agent of the 35 years former Barcelona star Dimitri Seluk, had last week stated that the star player has passed a medical to join a new club which happens to be the same club he started his professional football career in Europe.
premier soccer league news