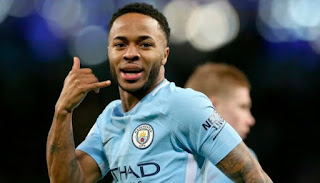 Manchester city is currently facing test of time in securing a contract extension for his star player from Real Madrid as top target.

The England international and Manchester city forward,Raheem Sterling is a big target for the Uefa champions in order to bolster the club by the summer of 2018/2019 summer transfer.

Manchester city has offered the England star the opportunity to renew his contract before the last world cup in russia but put his contract on hold till this moment.

The forward is said to be expecting a mouth watering deal to consider an extension but his club his considering their spending limit in order not to violate Uefa spending rules.

The forward has been fantastic this current Premiership football league season having scored four goals for the Guadiola side.
premier soccer league news