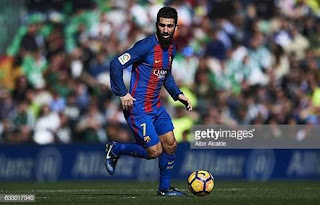 Barcelona football club and turkish star footballer is facing a fresh jail term in the club where he plies his trade in europe.


Ardar Turan is in serious trouble in the new Besiktas club he was loaned to for two football seanson after falling the pecking order with the Catalan Spanish club.

The turkish utility midfielder was said to have thrown a punch at a boyfriend of a girl he met in a night club,but the girl was said not given needed attention to the star player led to a confrontation with the girl's boyfriend called Barckey Sahin.

The Barcelona star later engaged in a confrontation with Sahin and it led to  broken of his nose while Arda turan later pulled out a gun in the night club.

The Barcelona star is presently being interogated by the police but his likely going to be jail because he is trying to snatch someone's wife and possession of fire arms without every required legal certification since all this is a crime in turkey.