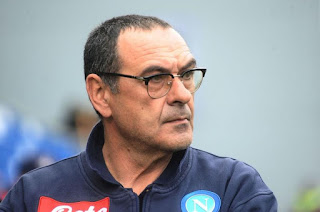 The Italian tactitician becomes the first coach in Chelsea history to play 10 premiership games without a defeat apart from the defeat to Manchester City in the community shield.

Chelsea coach Maurizo Sarri,has played a total 10 straight games in the premiership winning 7 and draw 4 to become the best record older in history of the club's premiership campaign.

The new boss however introduced a new attacking style of play to the club by changing from Chelsea's defensive traditional style of play known for decades and he has assured the fans of the club entertainment football while he remains club coach.
premier soccer league news