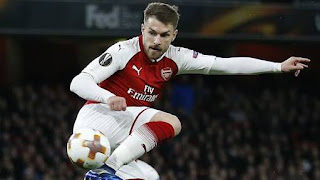 The prolific and versatile player is going to run out of contract with arsenal at the end of the current season and he his opened to a free transfer if Arsenal eventually failed to secure a contract extension for the player.

Aaron Ramsey is said to have made up his mind to leave the club but the likes of Alex iwobi and other close friends to him is trying to persuade him to stay by considering the fact that he is an extablished player with the Emirate club.