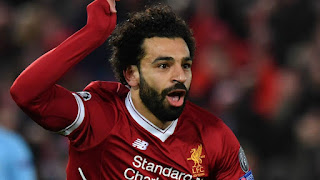 Liverpool football club and African sensational star has hit a goal record after the club victory in the champion's league match game.

Mohammed sallah has been struggling to have a goal scoring form like last season but his recent pick of form has proven his critics wrong for their condemnation.

The Liverpool star has scored a total of 50 goals for the club since his arrival from Roma and he has disclosed to never let his fans down in the current season while he promised more goal during post match conference.
premier soccer league news