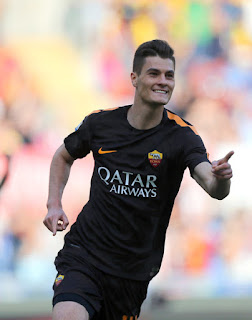 Arsenal football club have shown a serious interest to sign another player that would fill the void left after the injury of Danny welbeck against sporting Lisbon in the Europa league game on Thursday.

Roma football teenage sensational star has been seen as a potential replacement for welbeck that is currently doubtful of his future before tomorrow's x-ray scan to determine the seriousness of his injury.

Roma star player,Patrik Schick is rated to be £45 million pounds and Arsenal is trying to offer Aaron Ramsey to Roma plus cash to sign the 18 years old Roma star player.

Aaron Ramsey has refused to extend his contract with Arsenal after successful season of ten years with the club.

Ramsey joined Arsenal from Cardiff for a £5.5 million pounds in the year 2008 and he has said no contact extension for him and he would like to see a greener pastures abroad.