Barcelona football club have turned down Liverpool and Arsenal to sign the want away star player from Camp Nou club to the the two English giant clubs.

Ousmane Dembele has been ruled out by Barcelona to join any of the two big club in England ahead of the coming junuary transfer after he was linked to move abroad. 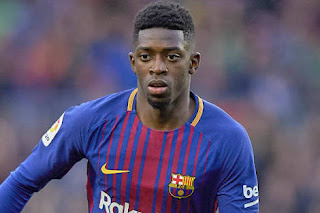 The France international star player has not been included in the first team football due to his recent issues of not taking the official permission away from training when he claimed been sick.

Ernesto Valverde has explained how dropping the star player his crucial to him than to make the star to pay a fine of €10,000 Euro as a discipline to any barcelona player that miss training without been adequately inform the club.

The star player is a subject of speculation because of his lateness attitude when coming to training ground and has been advised to comply with club's rules.
premier soccer league news