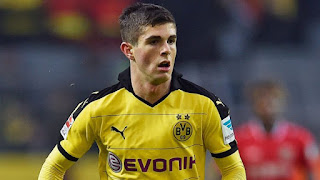 Chelsea football club have beaten the likes of Liverpool and Tottenham hotspot to sign an american star player that is currently having 18 months left on his contract.

The borrusia dutmund Christian Pulisic  has been a target for top clubs for like 3 seasons but he is part of the assist owned by burrusia dutmund among other player.

The American star player was very impressive during a game between England vs U.S.A to mark Wayne Rooney official testimonial game played for former Manchester United star at Wembley.

Chelsea is currently leading the race to sign the £70 million rated star winger that is having less than 18 month in his contract and Chelsea seems to be more in consideration for the American born star than Liverpool and Tottenham.
premier soccer league news