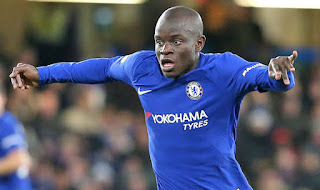 Manchester United and Real Madrid prime target has extended his contract with Chelsea as a pledge of future commitment to the stamford bridge football club.

Chelsea has been seriously considering the extension of contract for Ngolo kante for sometimes despite the interest from likes of P.S.G, Manchester United and Real Madrid to sign the star defensive midfielder.

The France international player was offered a new mouthwatering deal of £290,000 thousand pounds a week and the former Leicester city star said he is delighted to extend his contract with the club.

Chelsea can be able to discuss further with Eden Hazard to see if they could probably lure the star player to commit his future like the French star which the club just acquired his contract extension.
premier soccer league news