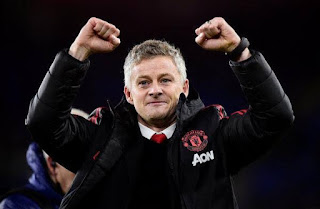 New appointed Manchester United interim boss have exposed some of the club's recent success after the club FA club win against Arsenal on Friday night.

The former club legend and Norway Superstar referred  the winning as the old way of playing arsenal from counter attack that he believed was the traditional way to  getting of result and success on Friday.

He hailed Romelu lukaku two assist that gave the club the well deserved maximum point and pointed to Jesse lingard of his consistency when playing epic games for the club and national team.

He stated if Manchester United can go back to their old ways of playing a structured ancient philosophy at Carringtonpark can make the club get back to his known best of  form.
premier soccer league news