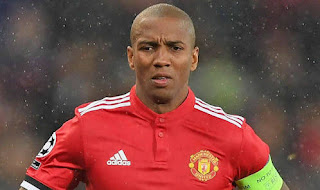 England international and Manchester United skipper have extended his contact with the club to make his services available beyond the end of the current season.

Ashley young current contract before the extension is due to expire at the end of current ongoing season and his Wonderful performance has earn him a reward for the extension.

The 33 years old former Aston Villa winger turned right wing back is delighted for a year contract extension offered by the club to make him available at Old Trafford till the next coming football season.

Manchester United is ready to extend Ander Herrera contract before the end of the current season and David Degea contract extension would make him become highest paid goalkeeper in the world.
premier soccer league news