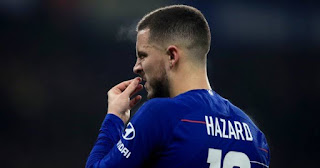 EPL fantasy is over chelsea football club after the stamford bridge club have agreed a transfer fee for his best player ahead of new premier league football season.

Chelsea have agreed a sum of £115 million pounds for the transfer of his best player to Real Madrid despite turning down the initial £100 million pounds offered to lure the star player during January transfer window.

The Belgian born international star player would be part of zinedine zidane's major overhaul to the Spanish club ahead of  new football season and the player would be earning £400,000 thousand pounds a week.

Real Madrid club president florentino perez told "THE SUN" of his dream on arrival of the 28 years old chelsea star and promise on returning the club to the old ways of hunger in winning trophies for club.
premier soccer league news