Messi became first player ever in history of European football. 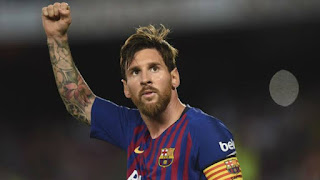 Messi has become the first player ever in the history of European football to set a new record of winning the highest number of  golden boot in the just concluded football season.

Lionel messi has won a total of 6 European golden boot and also defeated Cristiano Ronaldo that have won only 4 to his credit in the history of the award.

Messi scored a total of 36 goals to defeat Kelian mbappe that scored just 32 goals in the just concluded football season in all competition.