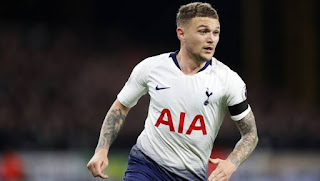 Juventus and Napoli football club of Italy are battling to secure the service of £25 million pounds rated defender as a replacement for their respective right full back.

Kieran Trippier is reportedly to be on wanted list of the two serie A giants and Tottenham is interested in selling the star because of having Serge Aurier and Kyle walker- peter as a replacement,according to a report by UK mirror.

Juventus seems to be more interested in the star because the current right full back  Joao Cancelo is close on a deal to join Manchester city at the Ethihad.