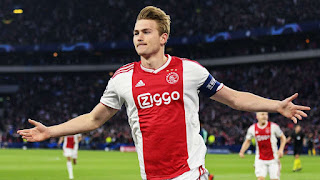 Juventus football club of Italy is reportedly ready to lunch a bid of €70 million euros for Ajax Amsterdam star player to the italian giant football club.

Should Matthijs de ligt sign for Juventus,he would make the sensational star player to be earning between €15 million-20 million euros per year with the turin club as reported by De Telegraaf.

Juventus is reportedly ready to offer the Ajax Amsterdam captain a 5 years contract offer to join the italian club giant after the star could turn down Manchester united move due to the lack of Champion's participation in next season.

The Netherlands versatile defender  has won a silver ware in both last season's European Champion's League against Liverpool and European Nations league against Portugal in both Final.