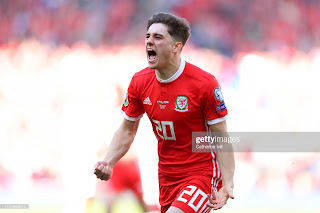 Manchester united football club have announced the club first major signing ahead of the next season premiership.

The Old Trafford football club announced the acquiring the signature of the 21 years old wales international and Swansea's football club star player at the club official website on Thursday.

Daniel James is the first major signing for a fee of £15 million pounds after Manchester united offered olegunar solksjear a contract from initial interim position.

The 21 years old prolific winger had a record of scoring 5 goals and 10 assist,also impressed in the fifth round in FA CUP scoring the only brilliant goal against Brentford and a five star performance display against  Manchester City in the FA quarter final.

The brilliant winger is confirmed and would be playing a major role in ole gunnar solskjaer plan of next season's premiership.