Manchester United fc turned down offer for most expensive star. 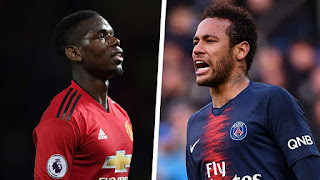 Manchester United FC executive director was reportedly to be aware and denied the opportunity given to acquire the signature of current world most expensive player for Manchester united.

Ed Woodward have denied the offer from Paris Saint German in a swap deal for Paul Pogba and Neymar Junior,according to a report from The Independent.

Both Paul Pogba and Neymar Junior, is seriously determined for a possible transfer away from their current football club as confirmed recently by the both players.

Neymar Junior is reportedly earning  £900,000 thousand pounds a week that doubled that of Sanchez currently on a payroll at the Old Trafford club.

Manchester United would not be participating in next season's Champions League and Ed Woodward might have put this into consideration.