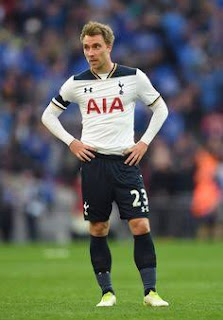 Manchester united FC have picked Tottenham's best midfielder as a possible replacement for Paul Pogba that is keen to leave the Old Trafford.

Even though Manchester united executive director Ed Woodward is said not to be interested in any deal or transfer offer for the french star as he remains the most valuable asset of the club.

Erickson has refused to extend his contract with Tottenham due to high wages demand but the star player could consider Manchester united bumper package deal.

Also,the Old Trafford club is seriously considering loan offer for Gareth Bale but Wayne Rooney warned against such move and said the kids are better than aged star to take the club back to his winning days.