Real Madrid CF agree on a deal with Athletico Madrid. 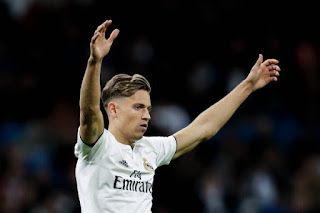 Real Madrid football club have agree on a deal with Athletico Madrid on a transfer of  Real Madrid midfielder to Athletico according to a report from the camp of Real Madrid.

Marcos Llorente deal of €35 million Euro to  Athletico Madrid was confirmed officially by Real Madrid on the club website as they  wishes him the very best in his future endeavours.

The Athletico Madrid star player is just 24 years old and he played a major role in Real Madrid's final game at the last world club cup with a goal to his credit.

He also won the best player award in the competition final held in UAE and he his expected to complete his medicals and proceed to sign a 5 years contract to Wander Metropolitano club in couple of days.