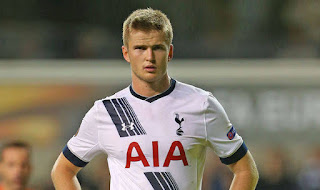 Eric Dier was name by Manchester united new manager as a replacement for ageing Nemanja Matic as a backup for the Serbian born star.


The 25 years old England international had 18 games appearances in the last premiership league season but the club may decide to stop the deal if Eriksen eventually leave ahead of new football season.

The versatile and utility player is considered to be part of Manchester united FC possible signing as the club embark on rebuilding process after a woeful performance in the last football  league season.