Bale left out of Real Madrid squad for Osasuna clash 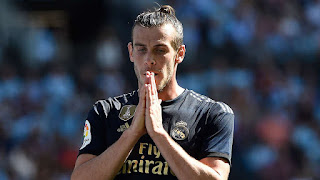 The Wales international has been in impressive form for Los Blancos this season but mystery shrouds his absence for Wednesday's match.

Gareth Bale has been left out of Real Madrid's squad for their clash with Osasuna in La Liga on Wednesday.

Zinedine Zidane's side are looking to build on their victory over Sevilla on Sunday, with a win over their newly-promoted opposition potentially enough to take them to the top of the table depending on other results.

They will have to do without Bale, however, who has made a strong start to the season following a summer of uncertainty regarding his future.

Blancos president Florentino Perez pulled the plug on the Wales international's proposed move to Chinese Super League side Jiangsu Suning as Zidane looked to move the forward on according to a report from GOAL.

The reaction of Bale, however, has been impressive, with the former Tottenham star contributing two goals and an assist in his four Liga matches in 2019-20.