On-loan Arsenal forward Henrikh Mkhitaryan scored on his debut as AS Roma beat Sassuolo 4-2 in Serie A. 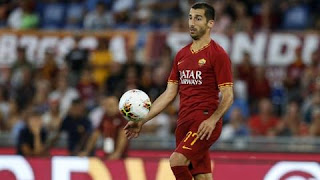 On-loan Arsenal forward Henrikh Mkhitaryan scored on his debut as AS Roma beat Sassuolo 4-2 in Serie A.

The Armenia international scored his side's third goal with a low strike after Bryan Cristante's header and a volley from Edin Dzeko had put Roma in control.

Justin Kluivert's composed finish made it 4-0 and although Domenico Berardi hit a brace for Sassuolo it was too little too late.

The win was Roma's first of the season.

They are seventh with five points after a win and two draws from their three games so far according to to report from BBC FOOTBALL.