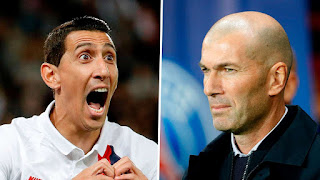 The Blancos spent more than €300m during the summer but they are painfully short on quality in every area of the pitch, as a 3-0 loss at PSG proved
Real Madrid lost – but what was truly shocking was just how lost they looked.

Paris Saint-Germain opened their Champions League campaign with a 3-0 rout of the 13-time winners at the Parc des Princes on Wednesday and it was even more of a stroll than the emphatic scoreline suggests.

And this despite the fact that Thomas Tuchel’s side were without the suspended Neymar, and injured duo Kylian Mbappe and Edinson Cavani

With the accuracy and ruthlessness of that trio, Madrid could have been left with a far more embarrassing scoreline to ruminate over on the way back to the Spanish capital.

Instead, a delightful double from Angel Di Maria and Thomas Meunier’s late strike did the trick for PSG, who reminded everyone that they can be a force at this level according to a report from GOAL.

Hardly surprising, then, that former Barcelona star Neymar was grinning like a Cheshire cat in the stands, as the club he wanted to leave during the summer annihilated one of those he could have joined.

There were no smiles from Zinedine Zidane, though.

Real Madrid invested more than €300 million (£265m/$330m) in the Frenchman's squad over the course of the summer and yet Zidane's rebuild looks half-baked, with the midfield particularly short on quality.

Of course, Paul Pogba had been one of the coach's primary transfer targets but the Manchester United eluded Madrid, as did other midfield targets, including Tottenham’s Christian Eriksen.

That has left Zidane with almost the same core as last season, only weaker after the departure of Marcos Llorente to Atletico Madrid.