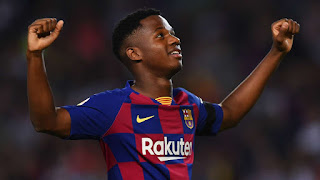 Barcelona Youngster to be rewarded for first-team breakthrough after an impressive display since debut.


Barcelona have opened contract talks with sensation teenager Ansu Fati following his blistering start to the season, according to a report from CatRadio.

The 16-year-old became Barcelona's youngest ever scorer and the third-youngest scorer in the history of La Liga when he netted against Osasuna last month before following that up with another strike against Valencia on Saturday in a Laliga game.


He only signed a new deal through to 2022 in July but his performances have prompted Barca to discuss improved terms, with the striker set to earn up to €1.5 million a year if he establishes himself in the first-team squad over the next few seasons with the catalan giant club.