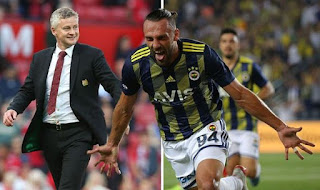 Manchester United had scouts checking out Kosovo hit man Vedat Muriqi when he netted against England at Wembley on Tuesday night.

He has scored twice in the opening three Super Lig games and Fenerbahce are being tempted to cash in by making a massive quick profit according to EXPRESS.

Pochettino is looking for someone to take the pressure off England skipper Harry Kane and believes that Muriqi could be the man to do that.

Muriqi who scored 25 times for Turkish minnows Caykur Rizespor has also had Napoli check him out but they cannot compete with money on offer from the Premier League.

Solskjaer admitted after the 1-0 win over Leicester that his side were far from perfect, and could enter the market to give United a better chance of securing Champions League football.
Transfer news and rumours LIVE