Wales midfielder Aaron Ramsey scored on his Serie A debut as champions Juventus came from behind to defeat Verona. 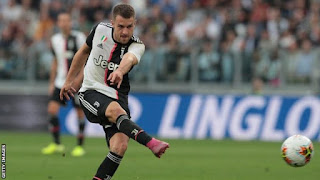 Ramsey, 28, made his first appearance as an 86th-minute substitute in the Champions League on Wednesday and saw his long-range shot deflected into the corner 31 minutes into his full debut.

Verona had taken a 20th-minute lead courtesy of Miguel Veloso's spectacular volley from outside the box.

But Cristiano Ronaldo completed the turnaround with a second-half penalty.

Returning veteran goalkeeper Gianluigi Buffon produced an excellent save late on to secure the three points - the 41-year-old making his second debut for the hosts against the side against whom he played his previous Juventus game in May 2018 according to BBC FOOTBALL.